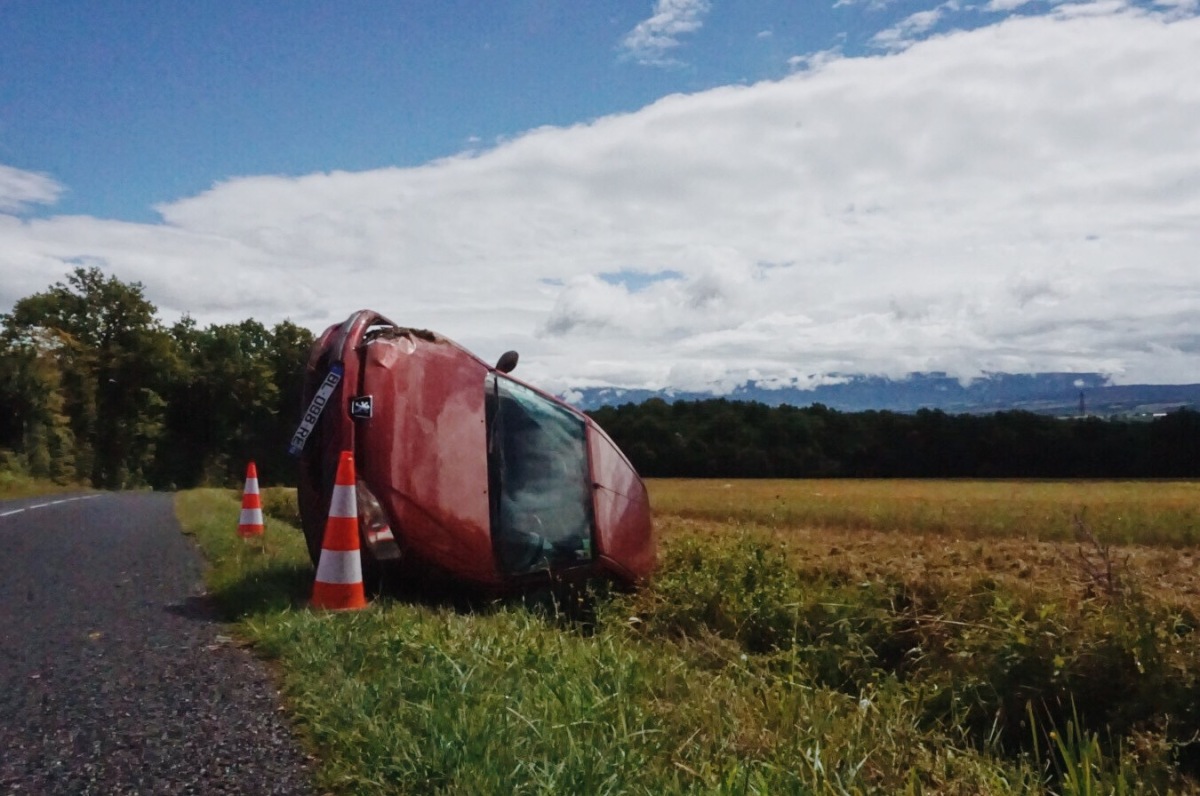 In general this day was another good preparation for the centralparts of my trip (Massif Central and Pyrennees) because today’s distance was pretty ok, and there was some climbing involved. I mean, in the end I got myself (and 25kg of equipment) over the southern Jura mountains.

After a very sleepless night in a hostel (I had a room’mate’ who remarkably mastered both smelling and snoring on a pro level) and a pretty decent hostel breakfast I started off at blue and cloudy but dry weather in Geneva.

The ride started with this bright encounter: Within the first couple of km I approached two cyclists with a label “Barcelona” on their panniers! We had a brief chat. Turned out that Florian and Johannes were also German (started in Ingolstadt) and we’re following a similar route as I am (generally more South). We briefly exchanged contacts and I’m confident we’ll meet up for a Cerveza later to celebrate our arrivals together.

I went on, and the weather turned. Sadly I was so optimistic about the conditions that my feet were already kind of wet by the time I put on my rain gear. In any case: real rain… wrapped up like a mummy, I arrived at Chancy, a little border bridge, and entered France. And that’s where also the Jura starts. By now it was sunny again. The first road into the Jura turned out to be a super steep, slippery and rough gravel road – This can happen… that I missed some of those spots in my route planning. But more problematic (to me) was that from the first second of that climb I was accompanied by an aggressive little dog that – as far as I interpret it’s behavior – tried to catch me. It almost had me… but I gave all I had and escaped; perfect: that adrenaline got me through the next steep and rough 400m. (Ja, I’m not really a dog kind of guy).

Some impressions from when I entered the Jura (still at lower altitude): here the feeling of exploration and adventure really set in; because I have never seen this kind of area (while I had already ideas about the previous landscapes in Switzerland) 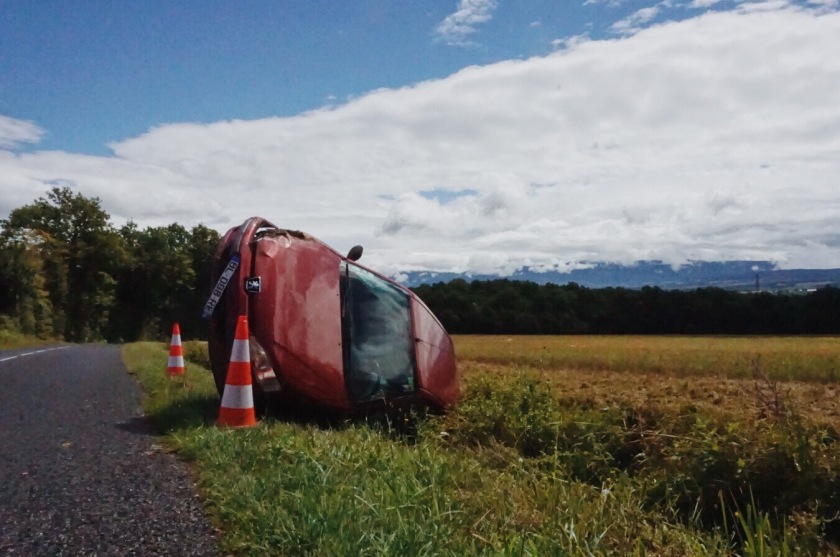 Then paved road again and the real long climb began… Gained about 800m altitude over a rather short distance. 7% gradient on average, I guess. And now it was hot and sunny. Certainly better than climbing in the rain.

Judging by the chalk letters of famous cyclists on the ground I was following a Tour de France road. 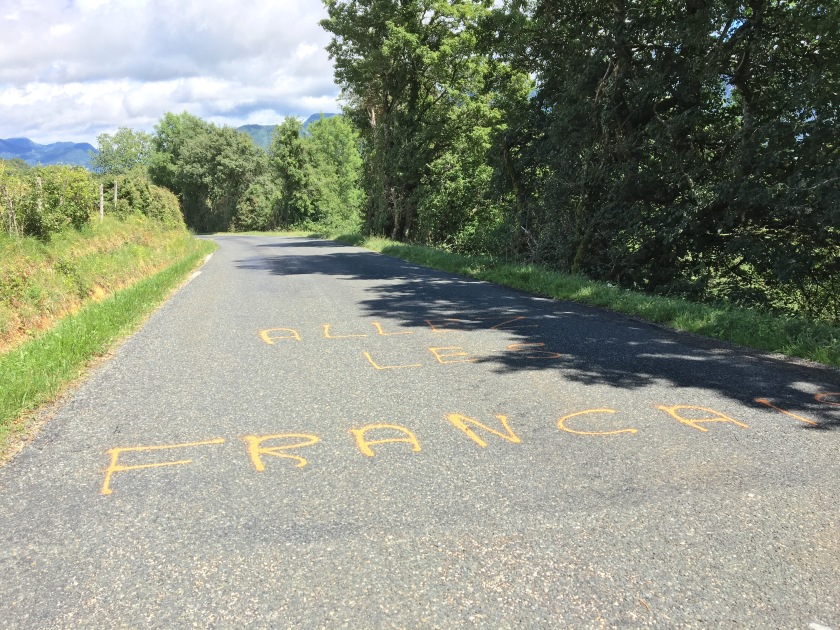 At some point I arrived at 1100m where I had a nice chat with a local who like me enjoyed this fantastic view and agreed to take my picture. In the background behind the clouds, usually the Montblanc would be visible. 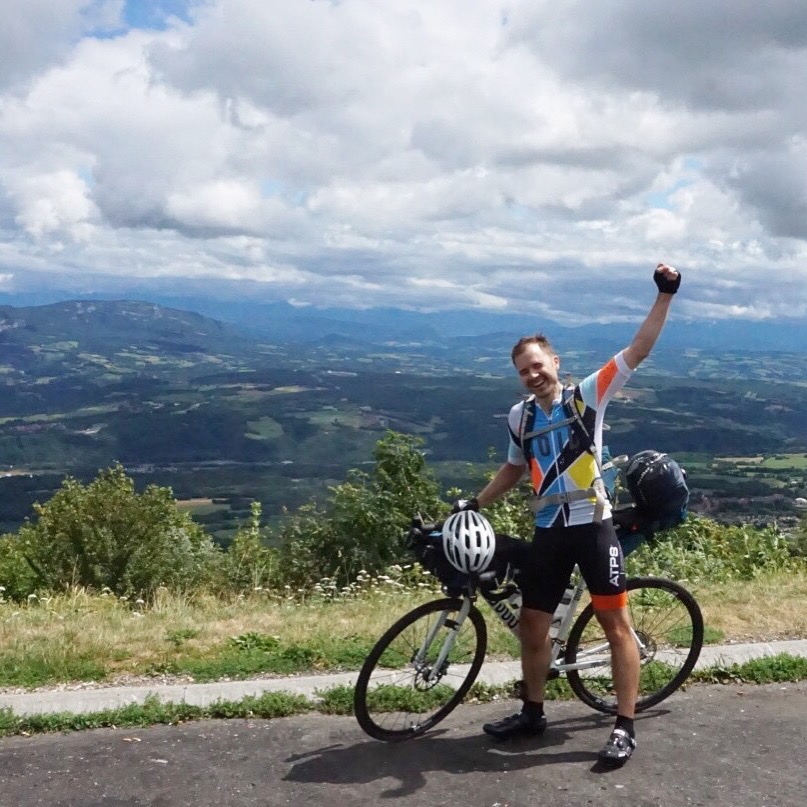 Up there it was really cold and now there was no mountain between me and the solid west wind anymore. But generally very quiet up there!

From there it went mostly (not exclusively) downhill. But once more I ended up on heavy gravel in the woods. And in terms of rain now shit hit the fan. Felt like a wet winter. Here’s an impression from a rainless moment in the woods:

​
Luckily no uphill fights anymore. At some point I reached a low altitude where it was warmer and greener again. And then surfed down a valley… unbelievable: 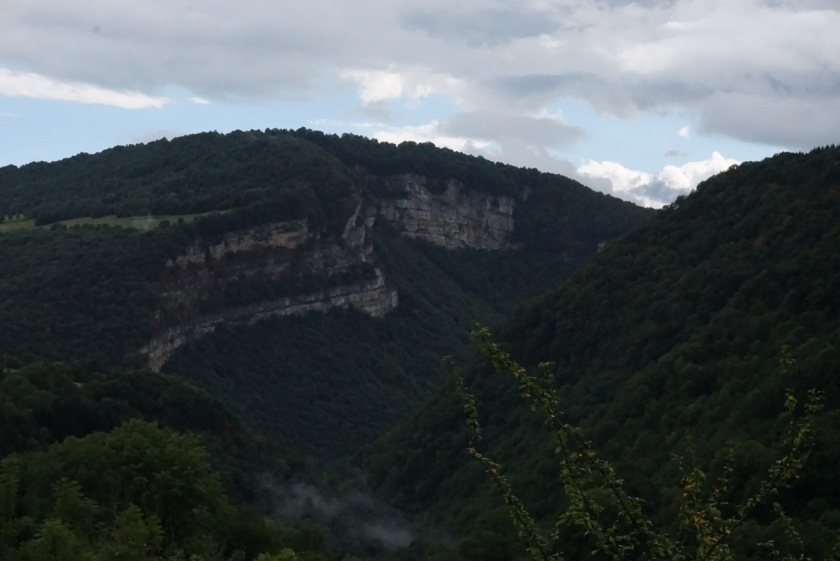 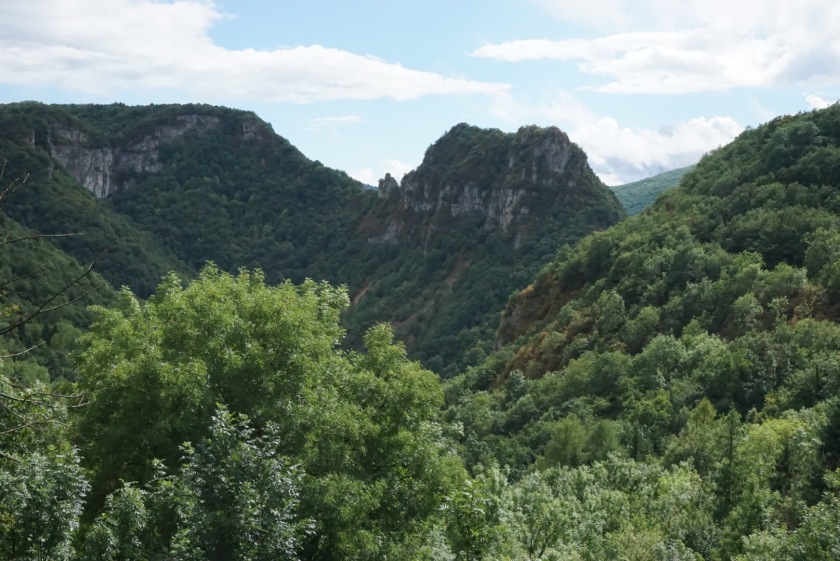 Sadly, at some point my potential energy that I worked for so hard earlier, was gone.. At this point I was really exhausted. Just the perfect moment to get the Bifi Roll into the game that I received from Diana and Micha three days earlier. 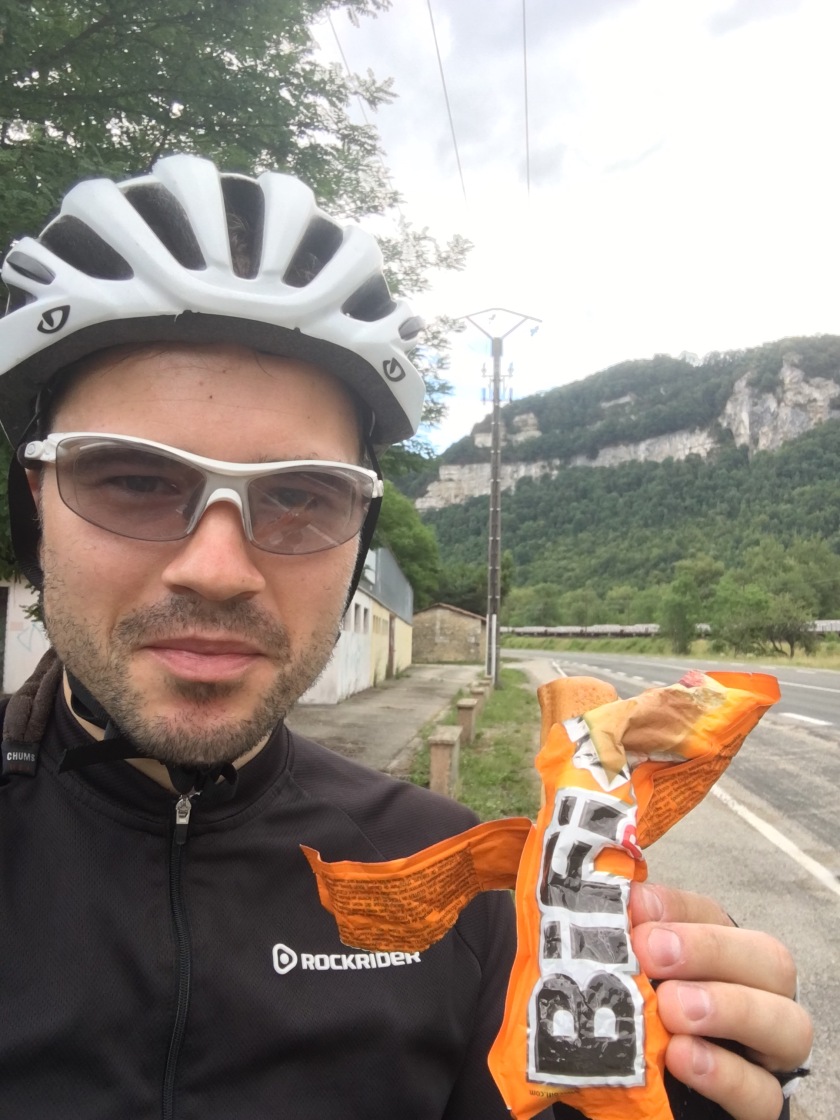 At some point I was liberated from the shadows of the Jura and absorbed by the width of the Rhone valley landscape. 60km to go to Lyon. And now strangely I felt really strong. I put on some motivating music.

Soundtrack of that Stage:

I raced down towards Lyon. Apart from another unwanted gravel episode on the last few km along the Rhone, everything went really smoothly and fast. I guess I nailed more than a 30km/h average there. 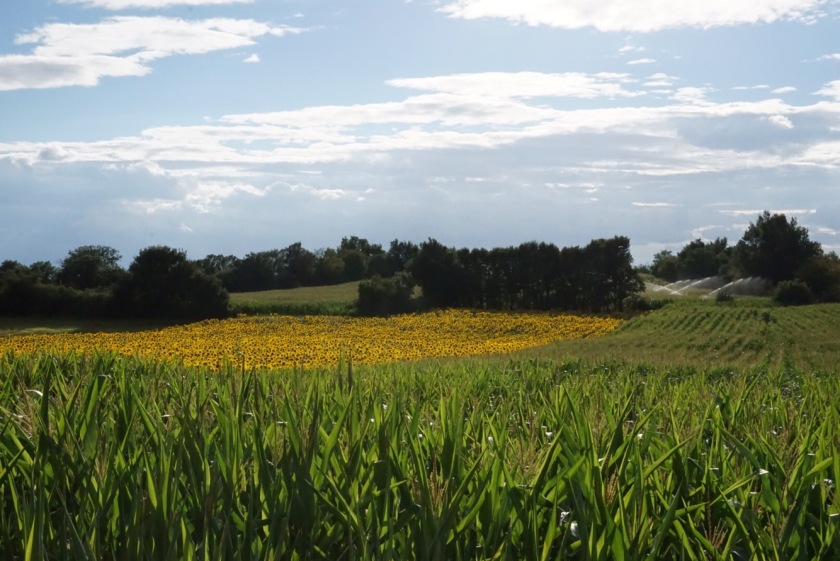 Arrival in Lyon about 20h. That night (and the next 2 days) I would stay at my friend Bérengère’s and her boyfriend’s place. We went out to have some original Lyonnaise food that night. My Lyon stay is something for some other post, but let me say that these 2,5 days with Bérengère and Geoffrey were very lovely and relaxed and fun! Thanks so much to both of you once more! Bérengère and me had not met in 6 years… 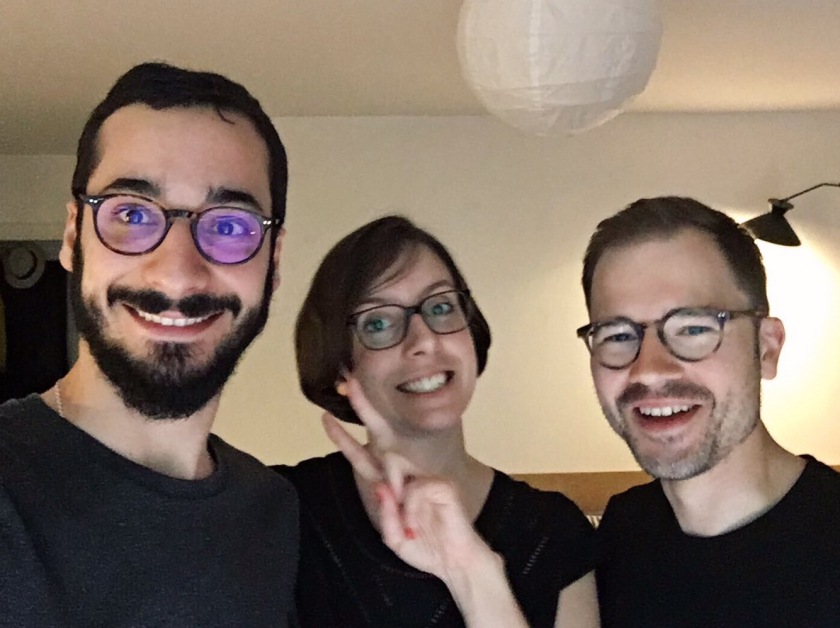 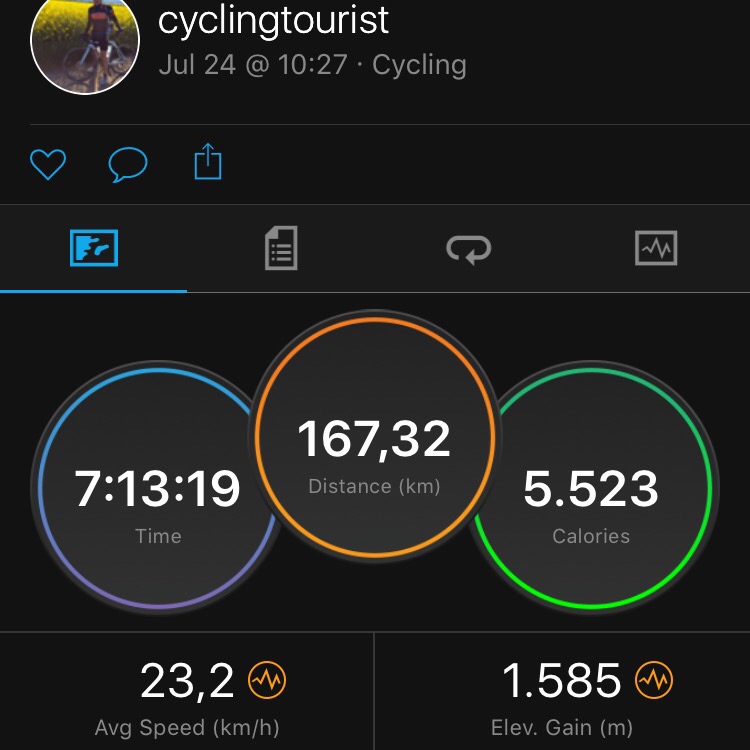